One of the most shocking news that flooded the internet last year was the sudden demise of Bollywood actor Irrfan Khan. The entire nation was in shock that the gem is now no more. The news deeply impacted the family.

Irrfan’s son Babil has appeared on many events since then, and every time he has shown how deeply he misses his Baba (father). Babil is all set to make his acting debut and will be seen in an OTT release very soon.

Babil took to his Instagram and shared a memory from last year, just days before Irrfan Khan passed away. In the picture, mother Sutapa Sikdar and brother Ayaan can be seen giving Babil a haircut by shaving it. He posted the picture with a heart-touching caption that read: 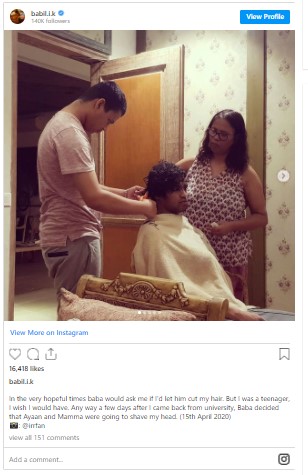 “In the very hopeful times, baba would ask me if I’d let him cut my hair. But I was a teenager, I wish I would have. Anyway a few days after I came back from university, Baba decided that Ayaan and Mamma were going to shave my head. (15th April 2020) 📸: @irrfan”

He also posted a picture of the best Holi celebration he ever had. The picture was posted with a caption:

“I remember the best Holi celebrations of my life at Jaansi’s house.”

Look At The First Look Of Alia Bhatt A...

Deepika Padukone Talks About Her Battl...