Akshay Kumar’s much-awaited movie ‘Bell Bottom’ has finally been announced to make a theatrical release. Akshay’s fans were waiting to see the star on the big screen, and this official announcement has made their dream come true. The star took to his official Instagram id and updated on the movie release date ending up the suspense.

Updating about the release date, Akshay wrote on Twitter:
"I know you have patiently waited for #Bellbottom! Couldn’t be happier to finally announce the release of our film. Arriving across big screens worldwide #BellBottomOn27July ✈️” 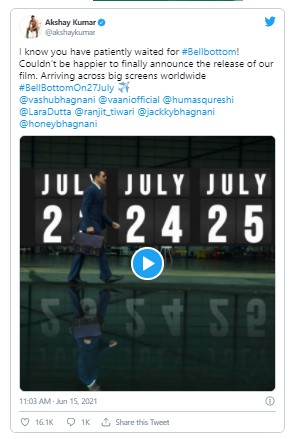 People were eagerly waiting for the suspense drama film, which is said to be based on true events. This will be the first Akshay Kumar starrer movie to enjoy a theatrical release this year amid the pandemic. This movie will be a treat for people who had been waiting to see Akshay in a vintage avatar. It brings back the 80’s nostalgia that people would love to watch.

Finally wait is over now . He announced the release date thanks guys for the update