Mandira Bedi's husband, Raj Kaushal, passed away on the 30th of June due to cardiac arrest. She is mourning the loss of her beloved one. She shares a cheerful picture with her late hubby and wrote, "Rip, My Raji," and also uses broken heart emoji. The duo is often seen in an exceedingly fun mood as they posed for the camera. 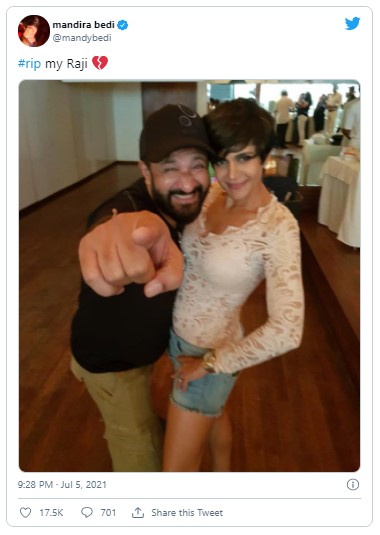 Mandira Bedi had posted some photos with Raj from their earlier days. She added a heartbroken emoji. She had also replaced her display picture with a black photo.

Mandira held a prayer meeting at her residence on the 3rd of July. Meanwhile, she was trolled by the netizens for breaking the age-old tradition by performing her husband's last rites. Several Bollywood and television celebs came forward in her support. The trollers didn't spare the actress for the choice of outfit she wore for the funeral.

Raj Kaushal passed away at 50, lived with his wife Mandira Bedi and kids Vir, Tara.

Dilip Kumar Passes Away At 98, Will Be Buried At Juhu Qabrastan Today

Disha Patani Calls It A Period Of ‘Rou...

Vishal Bhardwaj Ready For His Next Act...

Disha Patani Calls It A Period Of ‘Rough Time’ For Everyone.