Salman Khan posted a family picture on Instagram that included the three generations of the family. On the special occasion of Father’s Day, the Dabangg actor posted the picture with a caption:
“Happy Father’s Day” 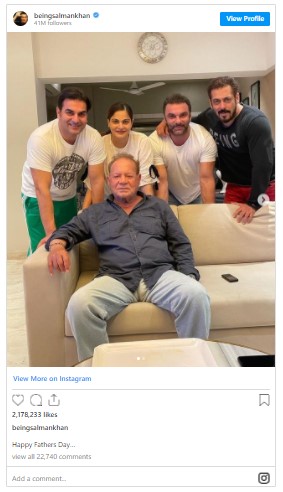 Salman, Sohail, Arbaaz Khan, and sister Alvira can be seen along with their father, Salim Khan in the picture. Arbaaz and Maliaka’s son Arhaan Khan, Sohail and Seema Khan’s son Nirvaan and Alvira, and Atul Agnihotri’s son Ayaan were also a part of the cute family picture.

Fans and actors flooded the post with comments. Farah Khan wrote “Fabulous this is.” whereas Rakhi Sawant said  “best family.”

On the work front, Salman was last seen in ‘Radhe- Your Most Wanted Bhai.

2 Years Of Kabir Singh: Shahid Kapoor Calls It One Of The Most Important Films Of Life