With Eid-Al-Adha today, Sara Ali Khan has brought the sweetest surprise for her fans as she dropped the cutest family photo on social media. The most adorable part of the photo was the fact that Saif Ali Khan and Kareena Kapoor Khan's younger son Jeh was also a part of it along with Ibrahim Ali Khan and Taimur Ali Khan. Sara shared the perfect family photo on her Instagram handle and wished all her fans on the occasion of Eid.

Taking to her Instagram handle, Sara wrote, "Eid Mubarak May Allah grant everyone peace, prosperity and positivity Inshallah hoping for better times for us all #staysafe #gratitude." In the photo, we can see Sara holding onto Jeh in her arms while Ibrahim can be seen sitting on the floor in front of Saif Ali Khan and little Taimur. In the picture-perfect photo, Sara ensured she covered Jeh's face with a quirky emoticon. Sara is seen clad in a white printed co-ord set while Saif is seen clad in a black kurta. Ibrahim is seen flaunting his casual style while little Taimur is seen sporting a green tee in the photo. 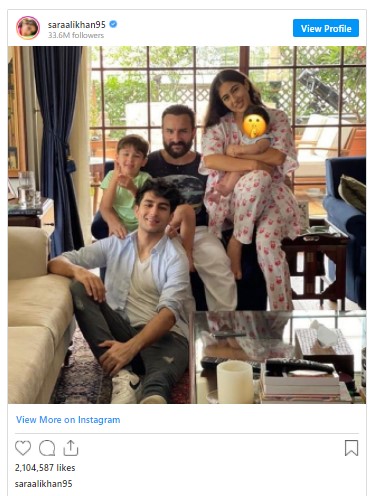 As soon as Sara shared the photo, comments began coming in from fans, and close friends. Manish Malhotra dropped two hearts in his comment. Fans also loved the perfect photo of Sara with Jeh, Taimur, Ibrahim, and her dad Saif. A fan wrote, "Awww love this! Eid mubarak ma shaa allah!" Another wrote, "Such a beautiful pic."

Meanwhile, in a chat a few weeks back, Randhir Kapoor confirmed that Saif and Kareena had named their second-born, Jeh. A few days ago, a photo also went viral on social media featuring Kareena Kapoor Khan and her son. The photo was reportedly from Kareena's upcoming pregnancy bible and since it hit the internet, fans could not stop reposting and sharing it. Kareena is yet to reveal her second son Jeh's face on social media and on previous occasions, whenever she has shared a photo, she too has concealed his face with an emoticon.

Deepika Padukone Talks About Her Battl...