Annually during this time of the year, when we celebrate the Goddess Shakti during Navratri, the other thing we relate it with is Garba; beautiful decorations, lightings, Gujarati music, and delicious Gujarati food. Garba is a beautiful dance form to look at and is even more joyful to be a part of. Initially, it was limited to the Indian state of Gujarat, but now, over the years, it has spread across the globe, and people seem to enjoy it all around! Every dance piece requires music, and so does the Garba, and it is best felt when the music is being performed live! There can be instruments or just someone singing their heart out to Garba Karaoke tracks. Either way, it feels incredible.

Legend follows that the demon king, Mahishasura (who was also buffalo headed), was destroying the world and creating havoc. Being a Brahma worshipper, he asked Lord Brahma for the boon of making him immortal. Lord Brahma gave him the boon but with a bit of twist; that he could not ever be killed by a man, God, demon, or a beast. Due to this, the Gods were troubled because of the destruction that was taking place. He had also attacked Trilok and Indralok, which was a topic of worry for everyone. All the Gods and demigods went to Vishnu to seek help regarding this, and the holy trinity, the three powers of the universe; Lord Brahma, Lord Vishnu, and Lord Shiva, came together, combined their powers, and created Goddess Durga, an incarnation of Goddess Parvati.

Goddess Durga and Mahishasura battled for nine long days. Finally, the battle ended with Goddess Durga stabbing the demon king, showing the immense display of women's power, and saving the world from destruction. People perform Garba to celebrate this victory of Goddess Durga over the demon king and to bring peace all over the world. The rituals and aarti occur before the Garba dance begins, and the entire fight between Mahishasura and Durga Mata is dramatized.

Garba and Dandiya Raas have been combined to create modern-day Garba. This traditional dance has been modernized into a beautiful mixture that is performed now thanks to the movies and media business.

The dance begins at a sluggish tempo, but the dance becomes faster and more enjoyable as the music progresses.

People marched in rounds chanting the goddess's name in a previous and older form of Garba as a tradition, with a pot in the center and a lamp on top of their heads.

As we mentioned earlier, one of the vital ingredients to Garba is music, and we all know, choosing the right music is not an easy job. But we have made it easier for you! Here we bring to you the top eight songs you can dance to this Garba season! 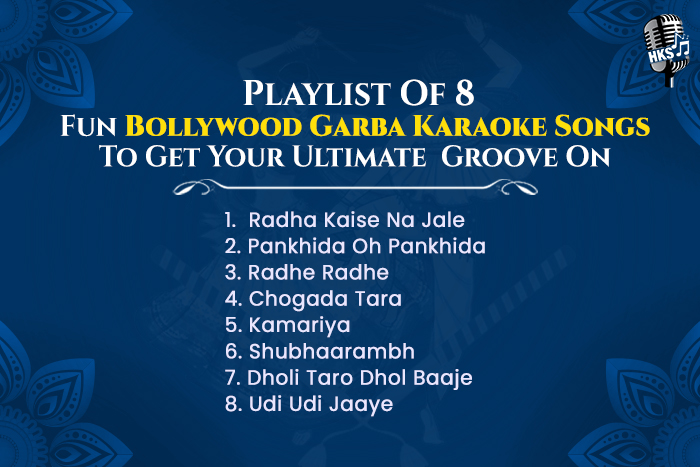 The song Radha Kaise Na Jale is from the 2001 movie Lagaan. Asha Bhosle, A.R. Rahman, Vaishali Samant, and Udit Narayan are featured in the song. Amir Khan and Gracy Singh feature in the film. The song has received many honors.

Pankhida Oh Pankhida is a dedicated Garba song released in 2015. Rajesh Mishra sings it and has given the music to it, as well.

Radha Radhe is a recent Bollywood song released in 2019. It was in the movie Dream Girl, which stars Ayushmann Khurrana and Nushhratt Bharucha. The song is by Meet Bros.

Chogada Tara is in the voice of Darshan Raval and Anees Kaur. It was released in 2018 in the movie Loveyatri. It was nominated for multiple awards.

Kamariya is a 2018 song in the voice of Darshan Raval and the music of DJ Cheats. It was featured in the movie Mitron.

Shubhaarambh came out in 2016 in the movie Kai Po Che. Shruti Pathak and Divya Kumar sing it. The movie stars Sushant Singh Rajput and Amit Trivedi gives the music.

Dholi Taro Dhol Baaje is a song by Kavita Krishnamurthy, Karsan Sargathiya, and Vinod Rathod. It was in the movie Hum Dil De Chuke Sanam, which came out in 1999.

Udi Udi Jaaye came out in 2017 in the movie Qurbaani. The song is in the voices of Sukhwinder Singh, Bhoomi Trivedi, and Karsan Sargathiya.

Garba celebrations are one of the most mesmerizing sights to witness. If you want to sing the above songs, you can visit our website and check out the Garba Medley that we have made, especially for this season.

Energize Up Your Diwali Party With Hit...

Getting the Best Out of This Year's Su...

Best Karaoke Songs to Sing for Your Da...

Energize Up Your Diwali Party With Hit Bollywood Karaoke Songs

Getting the Best Out of This Year's Super Summer Karaoke Sale

Best Karaoke Songs to Sing for Your Dad