Anushka embraced her motherhood by giving birth to a baby girl one and a half month ago with husband Virat Kohli. The actress was on a short maternity break but she has now resumed her work.

Anushka and Virat became parents and have been spending a great time with their new family member. However, they both have returned to their work.

Anushka was spotted in a white top and denim jeans wearing the mandatory mask. She looked gorgeous and in shape post-pregnancy. 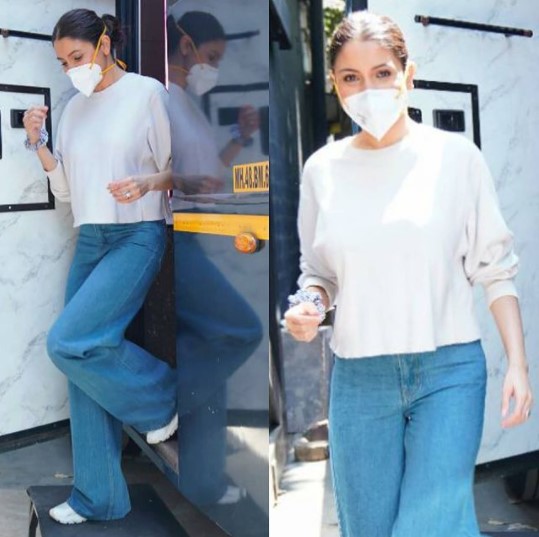 Anushka talked about her pregnancy plans while talking to a leading daily:

“I will be back to my shoots after I deliver my child, and will establish a system at home that ensures I can balance time between my child, home and professional life. I intend to keep working for as long as I live because acting truly makes me happy.”

During her pregnancy, she shot for various covers and commercials with of course following all pandemic norms. Anushka was in Ahmedabad to be a part of the India-England Series with Virat Kohli and daughter Vamika.

Anushka has been keeping her daughter away from the eye of the media. On February 1 she shared a picture in which she is holding the little angel standing alongside Virat. She captioned the picture:

"We have lived together with love, presence and gratitude as a way of life but this little one, Vamika has taken it to a whole new level! Tears, laughter, worry, bliss - emotions that have been experienced in a span of minutes sometimes! Sleep is elusive but our hearts are SO full. Thanking you all for your wishes, prayers and good energy."

Awaiting to see Anushka being part of some exciting projects.

Check Out The Pictures Of Akshay Kumar...

Check Out The Pictures Of Akshay Kumar With His Fan.