Janhvi Kapoor has shared a lot of pictures from another photoshoot. Her sister Khushi Kapoor has called it stunning.

Actress Janhvi Kapoor has shared pictures from another photoshoot on Instagram. She is seen presenting with her back to the camera, wearing a blue dress.

Janhvi is seen with her hair tied in a chaotic bun, showing her shoulders to the camera. She inscribed the post with just a blue butterfly emoticon.

Janhvi Kapoor's sister Khushi Kapoor remarked on her post, calling it 'astonishing.' The actor's fan additionally gave her commendations. "This is so lovely," thought of one. "'M ON MY KNEES," remarked another. "Neele Ambar wrote... Chaand jo aaye," a fan committed the melody to her. A fan even requested Disney got her on board as their new princess. 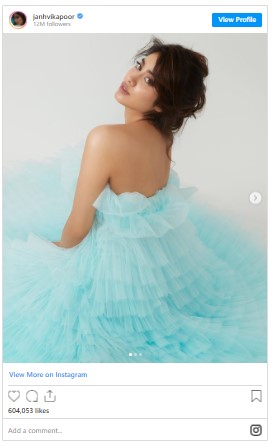 The actress, who is the daughter of filmmaker Boney Kapoor and late actress Sridevi, regularly shares photos of her outfits on Instagram. She as of late went to the initiation occasion of a nail salon in Bengaluru with her auntie Maheep Kapoor. She cut some stylized strips and moved in front of an audience with Maheep to her melody Nadiyon Paar

Janhvi Kapoor was most recently seen in Roohi, created by Dinesh Vijan and Mrighdeep Singh Lamba. The film likewise featured Rajkummar Rao and Varun Sharma. The ghastliness parody turned into the first film to show up in quite a while after the public authority permitted film lobbies to cross country to work at the full limit from February 1 with Covid-19 security conventions set up.

Janhvi's upcoming projects incorporate Aanand L Rai's Good Luck Jerry, the go for which she ended with March. Other than that, she will be seen in Karan Johar's period drama Takht, co-star by Kareena Kapoor, Ranveer Singh, Anil Kapoor, Vicky Kaushal, and some. The film has been set aside for later because of the pandemic. Karan has started chipping away at another task, a lighthearted comedy with Ranveer Singh and Alia Bhatt, named Rocky Aur Rani Ki Prem Kahaani.