Esha Deol shared a video on her social media account; she added different pictures, including her childhood. All the photographs show the actor dressed up in a traditional look with jewelry et al. the photographs seem to be from her stage performances. Meanwhile, she added the I'm a Barbie girl song for the video.

Esha shared the photographs and captioned them, "Never a barbie girl, though!" Actor Madhoo commented on the post, "Beautiful." Many of her fans also dropped heart emojis on the post. One fan also wrote, "Bachpan m Kuch Kuch Bobby Deol ki jhalak this imne (she looked like Bobby Deol in her childhood)."

Esha may be a trained Odissi dancer and sometimes performs for charity events alongside her mother, Hema Malini. Hema, actor-politician, maybe a trained Bharatnatyam dancer.

On Father's Day, Esha recalled fond memories of her childhood. Talking to a number one daily, Esha shared an "absolutely hilarious" incident from one of her earliest vacations that she could remember. She further talked about how Dharmendra bathed her, combed her hair, made her wear a party dress, put kajal in her eyes, and even gave her an oily hairstyle. Esha added that's a "cute memory" that she has from her childhood. 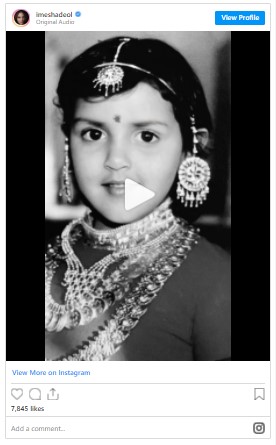 Esha was last seen in the short film, Cakewalk in 2019. it had been the primary time she worked in a film post the birth of her daughters Radhya and Miraya. Before that, she was seen in the 2015 Telugu film Manja.

Vidyut Jammwal Ready To Work In Hollywood With Wonder Street