Bollywood actress Raveena Tandon likes to keep her fans updated with her life through social media. She often uses the platform to share some fun time with her daughter and pets. This time the gorgeous actress took a walk down the memory lane and recalled the nostalgic memories with legendary actors Rishi Kapoor and Neetu Kapoor.
The adorable picture she shared was from Rishi and Neetu's wedding in which Raveena is seen standing and posing. She regrets getting the picture late but calls it a treasure for life.
The picture was shared with a caption: 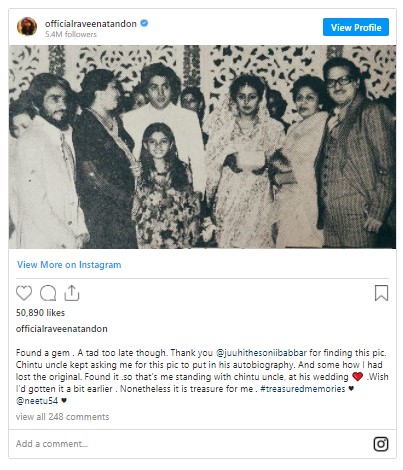 "Found a gem. A tad too late though. Thank you @juuhithesoniibabbar for finding this pic. Chintu's uncle kept asking me for this pic to put in his autobiography. And somehow I had lost the original. Found it .so that’s me standing with chintu uncle, at his wedding ❤️ . Wish I’d gotten it a bit earlier. Nonetheless, it is a treasure for me. #treasuredmemories ♥️ @neetu54 ♥️"

On the work front, Raveena will be next seen in ‘KGF: Chapter 2’ along with Yash and Sanjay Dutt.

Shahid Kapoor Treats His Fans With "Picture Of Happiness" , Along With A Motivational Thought.

Kartik Aaryan To Join Hands With Sajid Nadiadwala For An Epic Love Story.