Praineeti Chopra's upcoming project 'Saina Nehwal' unveiled the teaser of the much-awaited biopic. Parineeti hits the perfect shot as she plays badminton in her upcoming movie.

The teaser of the biopic is about Saina Nehwal, the Badminton champion and has been titled Saina. Parineetic has impressed us with her outstanding performance in many movies. This movie is a challenge for the actor, and in the teaser, she has justified the character of Saina. Grabbing Saina's entire look, she has also got a mole on her cheek that completes Saina's look. 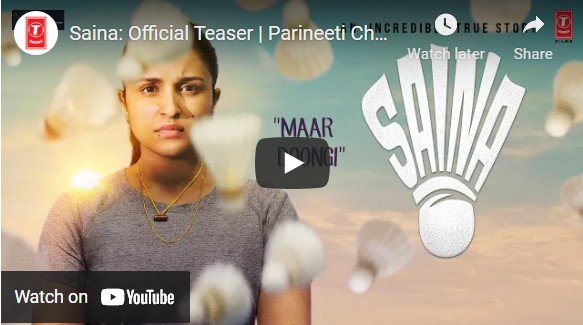 The teaser opens as Patrineeti talks about India's population comprising half of the females who get married at the age of 18. She further adds:

"Lekin mere saath aisa nahi hua, karchi-tawe ke badle mein pakdi maine talwar (But this didn't happen with me, I picked the sword in place of a pan and ladle)."

The visuals of the teaser shows how her coach and parents encouraged her to follow her dreams. With hard work and support, she becomes the first Indian Badminton player to win an Olympic medal. Adding more to her achievements, she also won five medals in the Commonwealth Games and became the only Indian woman badminton player to become world No. 1.

The film was directed by Amol Gupte, who has also directed the acclaimed movie 'Stanley Ka Dabba'.

The makers have announced that the biopic is set to release in the theatres on March 26.

Singer Shreya Ghoshal Announces Her Pregnancy. "Baby #Shreyaditya is on its way!".